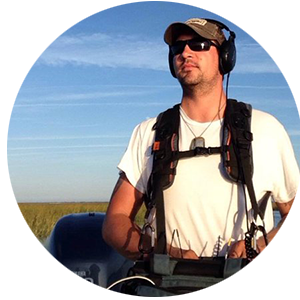 With over a decade of experience, working both locally and internationally, Adam has recorded in some of the most diverse and challenging environments that you can get a crew into. He has camped in the deserts of northern Uganda, mixed audio among Roma Gypsies throughout Eastern Europe, traveled the Arctic Circle and sweltered in the jungles of South America. Adam has recorded audio for Discovery, Travel Channel, ESPN, History Channel, TSN, CBC, TVO, EW, Sportsnet, CTV, Comedy Central, APTN, Travel & Escape as well as hundreds of commercial clients such as McDonalds, Audi, Budweiser, Samsung, Microsoft, Tim Hortons, Coors Light, Coca Cola and more.

Whether it’s in the jungle, the mountains or in a quiet film studio – crystal clear sound is essential to your production.  Get in touch for any location sound questions or needs!

Adam Parsons is a location sound mixer specializing in on-set audio for commercial, documentary and broadcast television productions. As a former professional musician, Adam has always had a love for audio on both a creative and technical level. His specific interest in the relationship between sound and picture led him to study film at Ryerson University, where he graduated with a BFA in Image Arts.

Over the last decade, Adam’s work has brought him to the farthest reaches of the globe recording in extremely difficult environments. He has camped the deserts of the northern Uganda, mixed audio among Roma Gypsies throughout Eastern Europe, followed rock legend Chuck Berry around the United States, and sweltered in the coffee bean jungles of South America. During this time Adam has recorded audio for Travel Channel, History Channel, Discovery, National Geographic, Biography as well as hundreds of broadcast commercial clients.

The best part of Adam’s job is traveling to new environments and embarking on new experiences. When not on set, he’s often outdoors and is often lucky enough to be able to travel and explore professionally as well as for recreation. In 2017 Adam is flying to Chernobyl, Ukraine to film a documentary about the abandoned structures left behind after the nuclear disaster. It will be a career highlight as well as a new adventure to capture!